One of the themes discussed at this year’s thought-provoking Sydney Writers’ Festival was — why do we read fiction?

One theory put forward in the SWF event, A Pack of Lies – Narration in Fiction, is that we read to make sense of our lives and to develop empathy. It doesn’t really matter if the stories are true or not, they offer us access to the lives of others.

Guest speaker Dr Paul Dawson commented there’s more to reading fiction than the opportunity to walk in someone else’s shoes, or the intimacy of being in another person’s head. Paul called storytelling cognitive play and if done well, narratives can provide referential truths for readers. 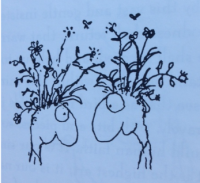 There are many reasons why we’re drawn to stories, and I think one of them is checking other people out. Apparently we all read autobiographically, i.e. through the lens of our own experience. Some of us read to answer the question — is it just me? Humans are social creatures, and we tend to like reflections of ourselves in others.  Delving into other people’s minds and mental journeys can reassure us. We compare ourselves to others, assess, check, validate, justify, and if we’re open to it, can be challenged and altered by the stories we read. They can offer us a hint of the other way out.

According to Professor Robert Winston, the most complex task our brain must do is socialise; to learn to relate to other people, to learn the cues for who to trust, how to read people, how to win the friendship of strangers and love of those who matter most to us. Novels may not give us the added visual cues of body language, but narratives still give us fascinating insights into how to master the above.

Fiction is the watering hole we gather around to dip our toes in, and see how different yet similar we all are. Diversity is so much more than the colour of one’s skin, gender, sexuality or place of birth. Diversity is every other difference too — variations in DNA, in utero experiences, parenting, personality, upbringing, education, birth order, culture, religion, opinions, wealth, intelligence, opportunities, social skills, looks, social mores, moral compasses, preferences, even variations in the ghost symptoms of this or that mental illness many of us are pre-disposed to (aren’t most of us a little autistic?) and yes, empathy. Here are the rich pickings of fiction.

The question was also raised — why do women read more fiction than men?

I think there are many approaches to this answer. Fiction often deals with emotions. Perhaps women read more fiction because they’re more open about emotions, and have been socialised to share their feelings more than men. I have seen many women (not all) choose to do so in workplaces, mothers groups, study groups and book clubs. Women give advice, discuss husbands, children, relatives, schools, careers, recipes, handy hints, health, films, TV shows, holidays, cars, real-estate, pets, retirement plans, superannuation etc. Okay, and men. Many women are happy to share from the minutiae of daily life through to the 5 year plan, (just look at Facebook) and this includes recommending books to each other.

Why? Perhaps it’s an evolutionary thing? Did women who collaborated, were curious about the way others maintained relationships, found food, kept warm, and reared their young improve the chances of their survival and that of their offspring? Perhaps this desire to bounce off each other is hard-wired into us more than we realise? Hard core feminists can shoot me down, but it’s interesting to ponder why women read more fiction than men.

Having said that, many men have come to enjoy the literary or popular fiction novels their female counterparts have suggested/left lying around/forced upon them. I’ve been surprised and delighted that men enjoyed my first novel in the Arafura series. Feedback like the comment below on Amazon altered the way I approached the next Arafura novel – Unfinished Business (I’m still confused by the broad term, ‘chick lit’, which seems to be attached to any female author who has a female protagonist who falls in love. What if the dude falls in love too, and men enjoy reading about that?)

‘When I first heard about this book, I was warned that I may not like it because it’s ‘Chick lit’. Well, if only women can enjoy this tale, then I need to get my oestrogen levels checked, because I thoroughly enjoyed it. I’ll admit I wouldn’t normally pick a book like this, but I’m glad I strolled outside of my comfort zone.
I enjoyed the humour, the location, and the characters … hell what isn’t there to like about this book? If this is an example of how good ‘Chick lit’ can be, then I’ve been missing out on great stories for years. Two thumbs up.’ (Ben Brown-Perth)

Perhaps why women read more fiction than men is only cultural, a socially constructed gender issue? Let the publishing marketers loose with that.

Why can’t men read fiction with elements of romance? I look forward to Graeme Simsion and Anne Buist’s new novel, Left Right, which sounds like a romantic comedy told from the separate perspectives of the leading male and female characters. I’m sure many men will be reading Left Right after thoroughly enjoying Simsion’s, The Rosie Project, which is classified as a romance novel on the internet. Bill Gates loved The Rosie Project and recommended it on his blog (one giant leap for Graeme, but his novel IS a great read).

Why do we in the West feel the urge to allocate types of fiction and its readers into such tight pigeonholes anyway?

Another question—why are we drawn to violence and crime in fiction, was also raised at the SWF event, On Deception, with Michael Connelly, Liane Moriarty and Sascha Arango.

Sascha Arango suggested we’re drawn to crime and violent stories because they allow us a window into a world we’re no longer allowed to participate in. In The Human Mind, Professor Robert Winston supports this, saying as humans we share a universal battle to master our emotions and control our behaviour. In civilised society we must do this for the good of all, but it’s entertaining to vicariously tiptoe over to the dark side.

I did so by taking a tour of The Rocks a few nights ago in Sydney, and I agree with Sascha. The violent history of The Rocks is a world away from us now in 2015. No more public hangings, Bubonic Plague, men sold into naval slavery, murderous gangs in the streets, and often hand-to-mouth existences. But it was SO compelling hearing the stories.

I think we love to read or watch how far other people might go in certain situations, and why. We’re fascinated by what might happen when the boundaries are tested and the gripping consequences that might play out. Historical fiction (and autobiographical non-fiction) can be especially tantalising for some as they’re based on true stories, thereby offering cautionary tales made more shocking and potent by facts and actual human behaviour.

The theme for this year’s Sydney Writers’ Festival was, it’s thinking season, and this was certainly true for me. I now also have a reading list a mile long!